You would think that 36 large domes spread over an area of more than 20 kilometres and rising 546m above the plains (some 200m higher than Uluru) would be a little hard to miss, and yet Kata Tjuta largely remains the undiscovered Red Centre gem. But not for long! Many travellers are uncovering the wonders of this second monolith and some in fact believe it to be best kept secret.

Kata Tjuta, meaning ‘many heads’ in local Pitjantjatjara, and sometimes referred to as The Olgas, is a sacred site for men, and a place where many legends of the Tjukurpa play out. Traditional ceremonies still take place amongst the domes, and as such certain access is restricted, even to local Aṉangu women and cultural stories are unknown and photos of it are relatively rare.

Whilst the cultural stories remain much of a mystery, there is still much to see and experience – choose one of the touring options available, or go it on your own. You can hike it, take a heli, or discover the hypnotic sunrise’s and sunset’s from the dedicated viewing areas.

But to get a true understanding of its size and beauty, it’s worth taking the time to walk through Kata Tjuta’s valleys and gorges. The 2.6km (1.6 miles) return Walpa Gorge Walk is rated grade three, making it suitable for most ages and fitness levels. Over 45 minutes, you wander between the sheer walls of the gorge’s two tallest domes, along a rocky creek bed past rare plants and gum trees. As you walk, listen out for the sound of the wind hissing through the chasms for which the gorge is named. Walpa means “whistle” in the local Indigenous dialect.

At 7.6km (4.7 miles), the Valley of the Winds trek is much longer, but is arguably a more immersive experience. The full circuit takes around three to four hours (best tackled in the cool, early hours of the morning), but it’s possible to walk shorter sections of the track. The 2.2km return walk to Karu Lookout – also rated grade three – winds through Kata Tjuta’s domes, taking walkers through pastel-toned valleys coloured with silver gum trees and mint spinifex over 60 minutes. The 5.4km, 2.5-hour return hike to Karingana Lookout, meanwhile, is rated grade four with some challenging sections, but its climactic end point is a worthwhile reward. As you ascend to the lookout, you’ll be greeted by sights of a lush, improbably green valley – a secret garden of Eden.

See more about the walks available within the Uluru-Kata Tjuta National Park. 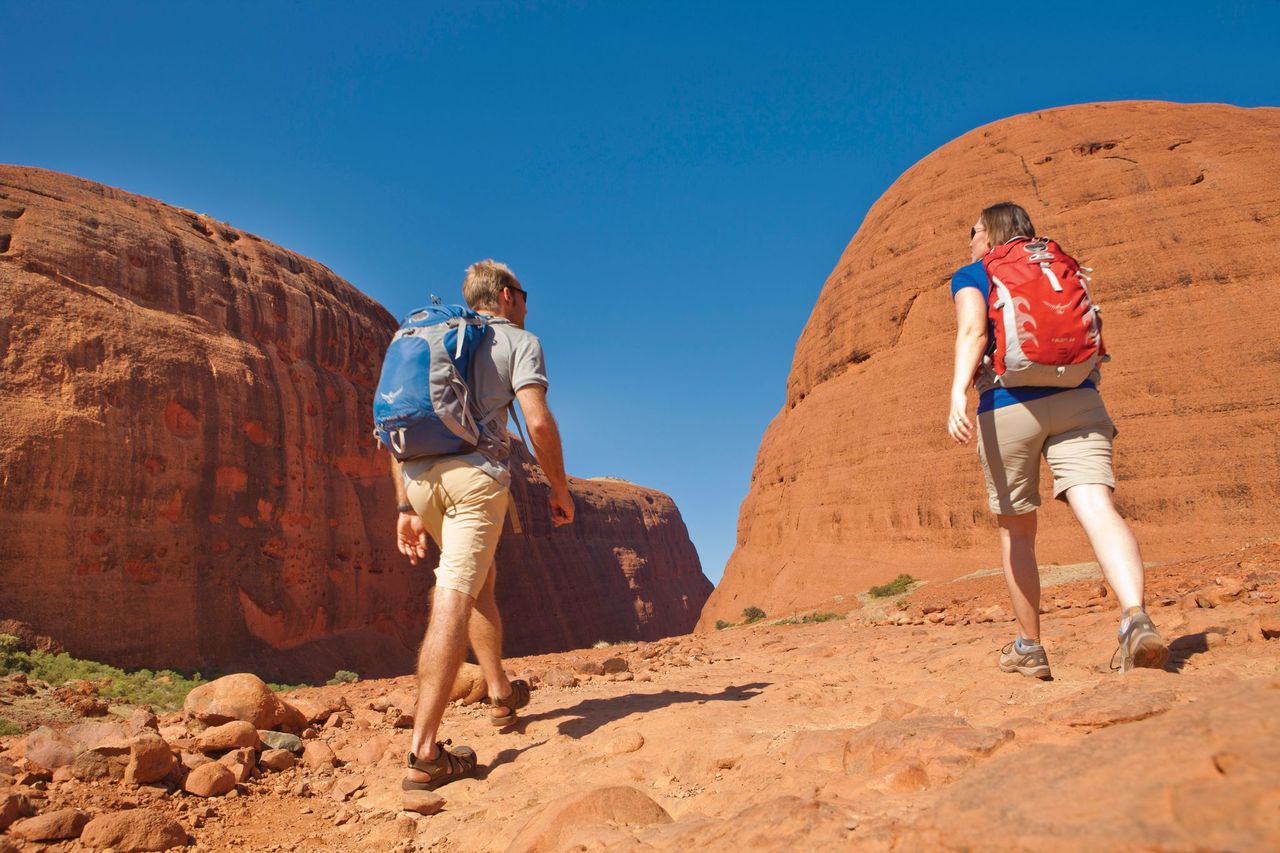 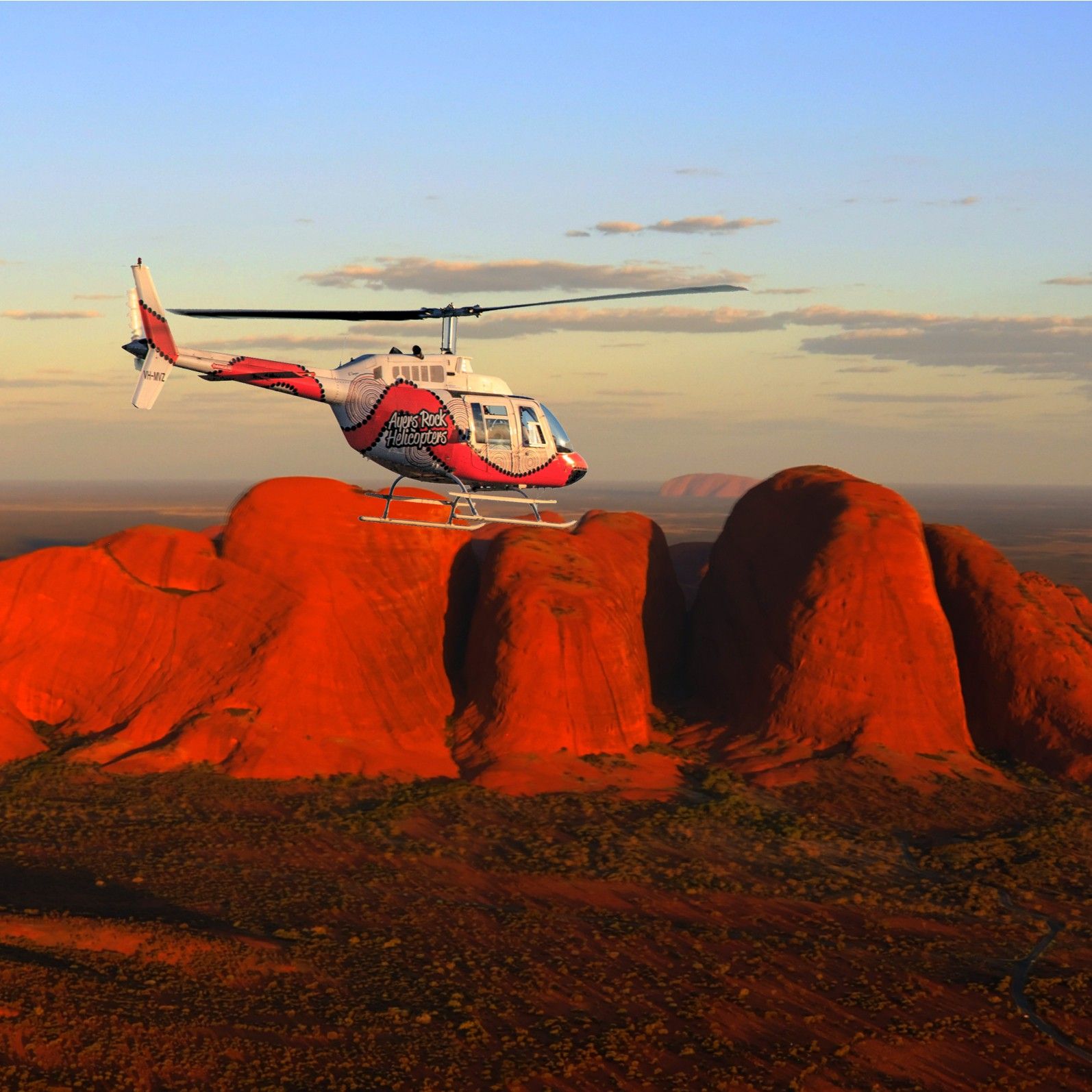 Having seen the 500 million year old monolith up close, it only makes sense, that to fully appreciate the sheer scale of not just Kata Tjuta, but the Australian outback in general, that you should take to the air, and a heli tour is a fantastic way to do it. Nothing puts a 546 meter high rock in context better than the 327414 acre expanse of desert of Uluru-Kata Tjuta National Park. With varied departure times from sunrise to sunset, there’s plenty of chances to witness both Kata Tjuta and Uluru from the skies.

Like Uluru, Kata Tjuta is arguably at its most spectacular at sunrise and sunset when the colour of the boulders changes, often even appearing to glow. The best places to take in the sight are the Kata Tjuta Dune viewing area at dawn and the Sunset viewing area – with Uluru 30km away in the background – at dusk.

Kata Tjuta is located about 30km (about 45 minutes) from Uluru and is easily accessible by car, via Uluru Hop On Hop Off  or on one of the guided tours that offer a unique or private Kata Tjuta experience.

A collection of stories, travel tips, and insider perspectives carefully curated to inspire, educate, and entertain our guests.

View all our stories

What to Pack on your Outback Adventure

Why every Australian should visit Uluru

Uluru, through the eyes of its explorers

Romance in the Red

Putting Bush Tucker on the Menu

Most Asked Questions about Uluru

How to experience the indigenous culture in Uluru

Discover the indigenous culture of Uluru